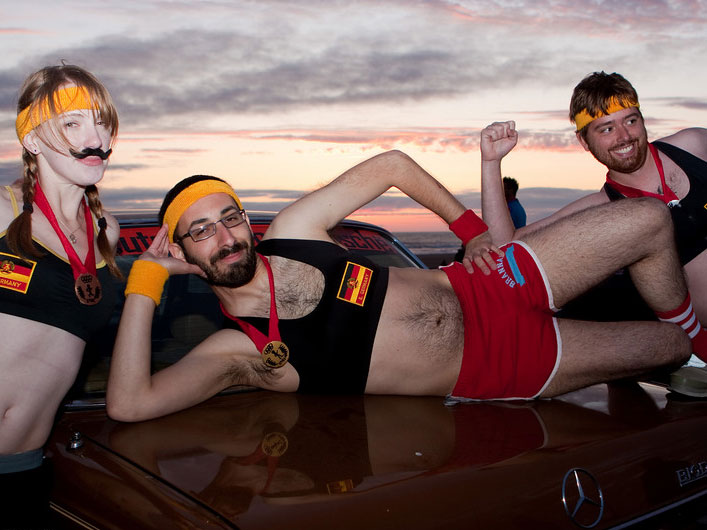 Rental Car Rally is Halloween on Wheels
RCR is an overnight, backroads-mostly driving competition between crazily-festooned teams competing for cash prizes and a golden gas pump. There are usually between 25 and 60 teams per event. Except this one time there were 73 teams and some dudes dressed as clowns crashed their minivan on a bridge in Canada. So. Anyway. It's ballerhouse tits-out crazytown.

You Win by Hitting the Checkpoints and Looking Awesome
RCR isn't technically a race. The team with the lowest odometer score and best costumes wins. Each team must hit several checkpoints along the route, including sites like abandoned airfields, giant decommissioned howitzers, airplane graveyards, and other absurdly awesome locations.

Expect Good Times and Possible Incarceration
Trucks, covered in dog fur! Grown men, dressed like Rambo! Grown women, dressed like trailer trash! Border patrol agents who don't like pot cookies, sheriffs who'll accuse you of pedophilia, casino owners  unamused by costumed gamblers, and bar managers who will kindly referee an impromptu Greco-Roman wrestling match. True stories. When you rally with RCR, you meet some amazing people who are bored with conventional entertainment and weary of respecting the Interstate Highway System.

What Happens in Tahoe?
Skiing. Both kinds. Hot tubs. Booze. And a sweet, sweet party and awards ceremony. Then more skiing and probably tubing. We'll be staying at one of the resorts. We'll reveal the exact location closer to go time.

Your Ticket Does Not Include:

Must you rent a car?
No. You mustn't. Use your own damn whip if you wanna.

Guarantees
RCR guarantees you will receive the items mentioned in your tickets. If you do not receive those items, you will be refunded the full cost of your ticket, minus the basic ticket cost.

The cars are gathering at 9pm

Check out the teams